Receive notification of new arrivals in your topics of interest.

Horses and art are what I know and love, and when I began selling out-of-print books part-time in 1973, I named the business Blue Rider Books to reflect these two interests. The Blue Rider (Der Blaue Reiter) was a group of early 20th-century German painters, and one of them, Franz Marc, provides my logo. 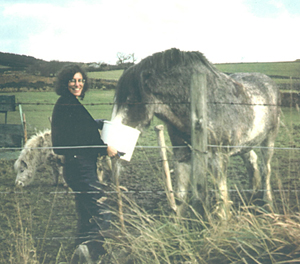 I grew up near San Francisco and earned art history degrees from Wellesley and Columbia. After a career as a staff and freelance art book editor for several trade and university presses, I began selling books full-time in 1983. In that year H.L. Mendelsohn and I opened our shop near Harvard Square. Along the way I changed the name to Robin Bledsoe, Bookseller, although many old friends and customers still think of me as "the Blue Rider."

My personal collecting and research interests focus on 19th-century equestrian print culture in the U.S.  I'm also researching a late-19th-century American racehorse trainer's career.  I'd welcome hearing from like-minded researchers, collectors, or anyone with relevant information or items to share or sell.

"The Horse Is Here To Stay."  In The Ephemera Journal, January 2022.  A look at my collection of books and ephemera that illustrates the transition from horse to mechanized power in America, ca. 1880-1930.

"In the Stable: The Horse and the Country House."  In The Carriage Journal, January 2019.  An account of the study tour sponsored by The Attingham Trust for the Study of Historic Houses and Collections in 2018.  We visited about 20 sites in and around York and Newmarket that are associated with English racing, hunting, and other equestrian pastimes--country estates, art museums, riding halls, stud farms, carriage collections, and many more.  A very special trip!

"A Canter through the Land of Children's Horse Books." In Firsts: Collecting Modern First Editions, July-August 1993. Republished in different forms in the National Sporting Library Newsletter (Summer 1994) and Equus (February 1996).

"Do You Have a Book on Learning to Post? Building a Dressage Library." In The Salute (New England Dressage Association), Winter 1987-88.

"A Library for Farriers." In American Farriers Journal, September-October 1983.

"Midget Horses in New York." In The Western Horseman, December 1963.

Consultant for many articles on collecting horse books for magazines such as Classic, Horsemen's Journal, Horse Show, The Chronicle of the Horse, etc.

" 'I Got the Horse Right Here': Information Networks in Nineteenth-Century American Horse Racing." Society for the History of Authorship, Reading, and Publishing (SHARP), Minneapolis, MN, 2007.

"At the Stable All Day: A Racetracker's Life around 1900." North American Society for Sport History, Springfield, MA, 1997.

"Robin Bledsoe, Bookseller." Sidebar in Michael Walmsley and Marlene Smith-Baranzini, Horse Racing Coast to Coast: The Traveler's Guide to the Sport of Kings. 2006. Featured as a side-trip for visitors to Suffolk Downs, East Boston.

Supplied all the books used as props in the Robert Redford movie, The Horse Whisperer, 1998.

I'd like to be notified of new arrivals in the following categories.

Check all categories that are of interest to you.